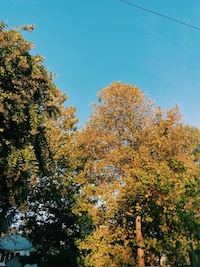 “To be poor does not mean you lack the means to extend charity to another. You may lack money or food, but you have the gift of friendship to overwhelm the loneliness that grips the lives of so many.” — Stanley Hauerwas

A dear friend of mine from D.C. recently moved to Texas this summer to go to law school. Washington, D.C. can be a fascinating and interesting place to live, most of the time. A few times a year, though, it can be immensely difficult. Not because of politics or elections, but because of transitions. D.C. is a transient city, a city accustomed to change. It’s rare to meet someone who grew up in the city and has stayed as an adult. Most of the residents move here for a job, an opportunity they can’t pass up in our nation’s capital. While this makes for some exciting relationships and experiences, it also means that every so often you bid farewell to someone who you’ve come to love and cherish.

For me, those farewells came in a string this spring and summer – several dear friends moved away for new jobs or grad school, leaving behind routine which felt incomplete without them. As someone who doesn’t love change and transition, I spent many hours trying to process what those friendship would look like in the absence of physical proximity. I set aside time to catch up with people via phone calls and I make a point to check in with my friends on big occasions.

One such occasion is final exams, of which one of my friends is currently in the throes. For me, the hallmark of friendships in adulthood has been incredible generosity – generosity of time (people helping me move), generosity of talent (friends paying for a birthday dinner), or generosity of spirit (assuming the best of someone despite what you know). Generosity often requires so little from us yet offers so much to the person on the receiving end.

We talk often about generosity as it relates to culture care, but I think we tend to over-complicate it. We live in a transient world and generosity is so often overlooked in the name of efficiency. Why send a letter when you could send a text? Why buy a physical gift when you could send a gift card? I think culture care generosity looks like slowing down – taking the time to listen to someone, to send them a card or a gift in the mail, or make time to call them rather than text. Friendship is not built on a foundation of efficiency.

Dear IAMCultureCarers all over the world!

Haejin and I just returned from spending five days at my alma mater Bucknell’s University. My monumental ​“Rhapsody” painting was installed at the brand new Kenneth Freeman School of Management with Art & Art History Building, and they designed the entire building interior after ​“Rhapsody”!

Here’s a video where I speak of the processes of creating ​“Rhapsody.” The idea of merging Art & Art History Building came about as one of the ​“crazy” ideas of an artist joining the board, and it was Ken and Steve Holmes (to whom the main entrance hall is named after) on the Bucknell board who made this ​“out of the box” idea into reality.

I am now delighted to work with seven Fellows and trainees at Bucknell. Ally Lima, who has been selected as one of Fellows Trainees this semester, has been a regular contributor here on this newsletter. This month, she interviewed Zoe Arts in Taipei, an entity that is part of our Culture Care movement all over the world.

Ally Lima is a student at Bucknell University, where she is studying English. She is also a Fujimura Fellow (in training!). Her reflections on justice, art, and culture will appear in the newsletter on a regular basis.

The power of art often lies beneath the surface, creating an impact that perhaps we cannot notice at a glance. I have often faced this struggle of finding meaning in the art that I have consumed or created, desiring to look past aesthetics to see the deeper message. After speaking with Claire Ho of the Zoe Arts Foundation based in Taiwan, I found myself looking at the influence of art in a much more nuanced way.

Zoe Arts utilizes educational programs, workshops, concerts, and other events to break down walls between cultures and form meaningful connections between those with different identities. Claire discussed with me the journey of forming the foundation and finding a new meaning for Zoe Arts, which had existed as a non-profit for 20 years before she and Zoe Arts Chairman Ginny Hu Chien took it over. As the two were given the opportunity to reinvent this non-profit, they made the discovery of ​“Zoe” meaning ​“life” in Greek, sparking inspiration for their meaningful journey. From this connection, the calling for Zoe Arts was made clear: life, art, and communication, or reaching out to people through different forms of art. After learning more about the foundation, it is clear that they have done just that.

As I was told more about the events and projects put on by Zoe Arts, my attention was especially drawn to the pivotal role of art in providing a window into different cultures, particularly Israeli culture. While the connection between Taiwanese and Israeli people may seem obscure, the way that Zoe Arts has brought together these seemingly disparate cultures displays the power of art in forming unlikely relationships, even if the impact is not immediately recognizable. By hosting Israeli cultural events and exhibitions in Taiwan, the foundation has provided the opportunity for people of all backgrounds to connect with and learn about another culture that they may otherwise find themselves entirely disconnected from.

Given the distance between Taiwan and the Middle East, Zoe Arts has proven to embody culture care on a global scale as these connections have been formed. In our conversation, Claire delved into the ethos of culture care and the way that it creates the opportunity for people to open their minds to listen first and then respond, allowing for the exploration of all possibilities. Zoe Arts has done just this by allowing individuals to pause and consume different forms of art and internalize it in the ways that they individually feel to be most impactful. As art is an expression, Zoe Arts has given the freedom to its consumers to appreciate the influence of the work in their own ways.

My conversation with Claire undoubtedly opened my eyes to the cultural impact of art in all of its forms. While perhaps I am not always quick to notice the deeper meaning behind a pretty picture at the first glance, the influence of art goes far beyond this in the way that it is able to bring people together, whether we realize it or not.