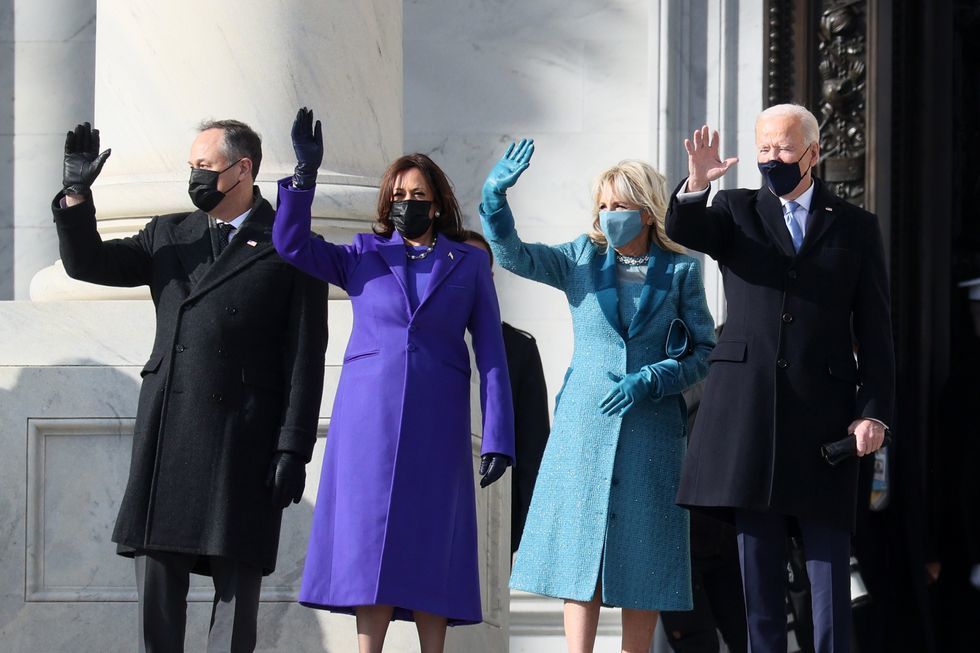 “…And yes we are far from polish, from pristine but that doesn’t mean we are striving to form a union that is perfect; We are striving to forge a union with purpose; To compose a country committed to all cultures, colors, characters and conditions of man…” — Amanda Gorman

I’ve struggled mightily for the past few weeks to put into words my reaction to what happened in the hallowed halls of one of our nation’s most protected institutions. The recent insurrection at the Capitol was eye-opening, not necessarily because of the violence or the proximity (although those two things are not to be discounted and are deeply disturbing) but because of how tangible an example it proved to me. In my lifetime, I would wager that I have not been exposed to a more clear example of idolatry in our country than that of what happened three weeks ago. To hear protestors invoke the name of God in the chambers of the Capitol building, or to see the senseless loss of life, reminded how fragile our hearts our. Jamie Smith has been reminding us for years, through his study of St. Augustine and others, that our hearts are broken and our loves mis-aligned. However, that idea didn’t quite come to life for me until I watched the news a few weeks ago, glued to the television in a way that seems to have become second-nature for many Americans over the past four years.

I am not here to make a political statement. Despite what you may or may not believe about the legislative agenda of the past four years or the ability of our country’s newest elected official, I do believe that the insurrection at the Capitol was the culmination of a notable series of events that (hopefully) taught America an important lesson: character matters. Four years ago, I wrote an op-ed for the New York Times about my alma mater’s decision to invite our then newly-elected Vice President to speak at commencement. I was a junior in college, filled with hope and the naive assumption that the worst was behind us. Donald Trump had already been accused of sexual misconduct, what else could go wrong? I wanted to use my words to communicate that my institution’s association, despite its intentions, was dangerous. I never intended for my words to be displayed on a national stage, and yet, they were. I stand by them today.

What I saw in the three and a half years since I penned that piece was precisely what people around me (wiser and smarter and more mature people) feared would happen: people became captivated with our Commander in Chief, making excuses on his behalf for words and behaviors that would land most ordinary people in a character time-out for life. Unfortunately, any policies that might have done some good in our country (and I believe that there were some) were quickly overshadowed by the latest PR crisis.

For many people, the events of January 6, 2021 were eye-opening. They were the last straw. People began to thread the needle and see the dangerous correlation between words and actions, between character and behavior. I don’t think our current President will fix everything. In fact, I think reuniting America will prove to be a much harder task than most people think. But if I have learned anything from observing Mako and his tender heart over the last several years, it is this: mending wounds, whether physical or emotional, take time. Often more time than we expect. Culture care requires patience. An ability to take what is broken and examine it, breathing new life into it. Recognizing that it won’t look the same as before, but nevertheless making a commitment to beauty and truth and goodness. A commitment to forming something, an idea, a painting, a piece of writing, a meal… in a simple act of defiance against a world that says ​“we are too broken to continue, this is the end.” Friends, I hope that we can be those people. People taking the broken pieces of our world and mending them, knowing that although this is not our final home, we can still put forth a spirit of renewal.

Instead of storming the capital, Dr. King and his followers walked away from the capital. Instead of several hundred bullies that entered the Capital illegally, and violently this Epiphany, two hundred fifty thousands of people peacefully marched toward the Lincoln Memorial on the morning of 1963. Which acts of a dark January days will remain as more enduring? Or perhaps the better question is, which will be more generative? 2021 Epiphany was perhaps one the darkest nadir of democracy in American history, and the cold January day in 1963 may stand as decidedly most generative. It reminds us that dreams of a man filled with faith, even in his exhaustion and his brokenness, were given wings of grace.

I wrote in my Culture Care book about Dr. King’s legacy, contextualizing the march in DC with Harper Lee’s ​“To Kill a Mockingbird”, in which a mob surround Tom Robinson, a falsely accused African American man Atticus Finch stands to defend:

Just like the mob in front of Tom Robinson’s jail cell, our culture is still prone to create scapegoats, dodging our own culpability and responsibility over cultural or systemic problems by blaming them on innocent individuals or groups. We still blind ourselves to the dehumanizing forces this unleashes. For any given provocation, we are egged on by our instant, omnipresent media to unleash our basest instincts-we might think of them as cultural ​“fight-flight-freeze” responses-rather than committing ourselves to the slower process of seeking truth. (One genuinely new thing is the virtual mob, which can be just as inhumane and culturally damaging as any physical mob.)

This self-debasement of our humanity in desperate and irrational fear of the ​“other” is a result of poor cultural stewardship. Little wonder that our culture is still bedeviled by cynicism, apathy, and anger. Cycles of violence and revenge are an ongoing reality. And when we focus on headlines and newsfeeds, we come to expect more of the same.

I wrote this in 2011, and it is chilling. I even wrote, in the paragraph before, ​“now a racial lynch mob is practically unthinkable.” On Epiphany of 2021, witnessed the desires of some ardent supporters of the President to do exactly that … but to their own Vice President. Our message must be loud and clear — Culture Wars rhetoric will lead to real wars. ​“Culture Care” is now an existential urgent matter. I continue in the essay:

In August 1963, prior to giving his ​“I Have a Dream” speech at the March on Washington, the Rev. Dr. Martin Luther King, Jr. found himself exhausted by a series of setbacks, imprisonments, oppressions, and disappointments. He was so physically spent that he spent many hours simply resting while his followers wrote the speech he was to give to the historic gathering. One of his close aides, Clarence Benjamin Jones, said that ​“the logistical preparations for the March were so burdensome that the speech was not a priority for us,” and that, ​“on the evening of Tuesday, August 27, [twelve hours before the March] Martin still didn’t know what he was going to say.” After walking a few miles to the Lincoln Memorial, he stood to read the prepared text, but he knew something was not right.

At the end of the prepared speech, Dr. King put down his text and began to speak extemporaneously; the energy of the crowd listening empowered him, and the result was the ​“I Have a Dream” we know today.

Imagine that-an artist pushing a tired preacher to preach from his heart. Dr. King was an artist of the dream, but it took another artist to recognize the artistry that was being held back by the context of the gathering.

Artists need to stand behind the podiums of preachers, teachers, and leaders and remind them to ​“tell ​‘em about the Dream!” Part of our calling is to remind leaders of what they are marching toward to begin with, to reach into the deepest recesses of their own visions. Sometimes, we may need to remind them to put down their prepared text.

As we welcome a new season, there will be new conspiracy theories and ideological scapegoats that will lead to more Culture Wars rhetoric from either side of the aisles. Culture Care is not a ​“war against” culture wars. Instead it is a nonviolent resistance to culture wars, to sow seeds of hope in the hardened soils of our cultures, for the generations to come. It is to remind our leaders why they are marching forward in the first place. Artists can Make, and inject new hopes of beauty into the New. May our year be marked with our sober reflection of what fragments we behold in our time — and may the fissures be filled with golden light.